Champions Crowned at the 8th Annual Northeast Shootout at Atco 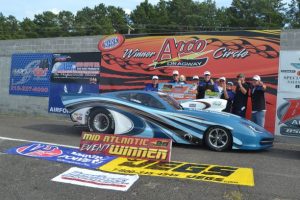 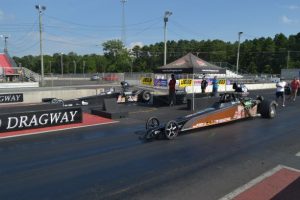 Atco Dragway – July 25th & 26th – The Mid Atlantic .90 Series hit its mid-point this past weekend with two events at the famed Atco Dragway in South Jersey. Two beautiful but, hot days welcomed racers from all over the east coast for a chance to be called champ at days end.

On Saturday, the first 6 round race of the season welcomed competitors in Super Comp presented by VP Racing Fuels and Brother Rigging. Heather Fetch out of Colonia, NJ claimed the #1 spot and a first round bye-run but was defeated in Round 2. With points implications on the line, current points leader Amanda Boicesco and second place Chris Mattern were still in competition going into round 3. In that round Boicesco would bow out to Joe Gallucci III, allowing Mattern to overtake her in the points chase as he matched up with Kevin Scholl in the final round. In that final Mattern took a large lead at the hit (.009 to .032) but, just did not have enough brake pedal to prevent from breaking out and handing the win to Scholl with an 8.916 to 8.892 victory.

As we turn our attention to Super Gas presented by VP Racing Fuels and Brother Rigging, Hank Smith had been on a tear so far this season. Smith came into Race # 5 with a 4-point lead over 7x Champ Iggie Boicesco and by the time round 3 came upon us both drivers were still in competition. Boicesco though would lose a heartbreaker to Frank Volpe Jr. in round 3 as both drivers recorded 9.90’s. Smith though continued his hot streak in his Awesome Vinyl and Graphics Camaro and met Volpe in the final round. At the Green Smith took a slight advantage (.011 to .022) over Volpe and parlayed that into a wire to wire 9.914 to 9.931 victory.

Rounding out Race # 5 with the 10.90 class of Super Street presented by VP Racing Fuels and Brother Rigging, Dave Bergfeldt out of Parlin, NJ took the #1 qualifying spot and a 1st round bye run and lasted all the way till the semi-finals where a red-light took him out against Frank Volpe III. Volpe, was appearing in his first ever Super Street final with the series against the ever-tough Dave Harvey Jr. In a race that Harvey will want back, Dave turned it Red by -.011 and a 10.902 as Volpe was dead late with a .166 light and 11.06 run to claim his first ever victory to go along with his 2019 Epping Lucas Oil Divisional win.

Race # 6 welcomed racers with some hot and steamy conditions in the mid-90’s, it was a battle of attrition to see who could outlast each other to the finish. In Super Gas presented by VP Racing Fuels and Brother Rigging, Bob Keister took the #1 spot with a perfect 9.900 but, was upset by Bill Phillips in Round 1. Phillips who had already claimed a victory at Race # 1 in his Super Street Camaro but, this time he brought out his S&W Prepared Corvette into his first ever Super Gas final. In the final, he faced off with non-other then Iggie Boicesco. Boicesco had gained some of the points lost on Saturday as Hank Smith went out in Round 2. In the finals, the two were virtually even with Boicesco getting a .024 to .026 jump but, Phillips laid down a 9.904 to Boicesco’s breakout 9.877 to hand Phillips his first 9.90 victory.

In Super Street presented by VP Racing Fuels and Brother Rigging 4x Champion Keith Mayers who came in as the points leader, claimed the #1 qualifier spot on Sunday. Keith drove his Porsche all the way to the final round where he matched up with 2018 Champ and long-time rival Dom Burgese from Williamstown, NJ and his 1969 Camaro. In the finals, Dom did everything he had to do laying down a 17 thousandths package on Mayers that made him mathematically ineligible as he was a little tardy at the hit with an .035 light. This was Dom’s first win of the year and make it 6 different winners in 6 events so far in the 2020 season.

Putting a cap on the final class of the weekend, we turn our attention to Super Comp presented by VP Racing Fuels and Brother Rigging. After riding the wave of his first victory of the season on Saturday, Kevin Scholl came back to try and conquer Race # 6 in his S&W Built Dragster. Walter Olt lead the field with a #1 qualifying effort but was upset by Dave Long in Round 1. Scholl continued his streak of 11 straight round wins all the way to the final round where he would match up against young-gun Mike Bodnar. Bodnar was looking for his first ever MASCA win and had the light in the finals (.019 to .047) but, as they traveled down the 1320 strip Bodnar made the same mistake Saturday’s runner-up Chris Mattern did and broke out with an 8.892 to Kevin’s 8.956 to make it a back to back double up weekend for Kevin and a move into 3rd place in points.

The series will now take a short break before concluding it is 2020 season in back to back weekends on August 29th & 30th at Maple Grove Dragway and Labor Day weekend at Atco Dragway on Sept 5th & 6th.