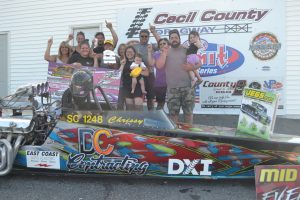 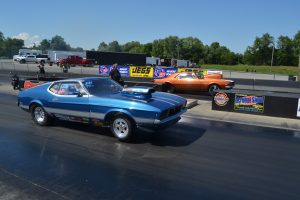 In Super Comp on Saturday, Ken Moses paired up against 1st time finalist Chris Cepelka. At the hit they had almost identical reaction times (.038 to .039) in favor of Cepelka but, as they reached the stripe Cepelka took too much stripe handing the win to Moses in a double breakout 8.893 to 8.875.

Moving onto Super Gas, Hank Smith continued his early season hot streak with a 2nd final round appearance this year matching up Rich Price in the finals. Smith found himself behind at the Green to Price (.011 to .017) but Price broke out with a 9.892 to Smiths 9.895.

Rounding out the action on Saturday was Super Street Four time series Champ Keith Mayers Porsche to the final round matching up against first-time finalist Kelly Kundratic in her Monte Carlo. In the final Mayers took a big advantage (.010 to 0.52) over Kundratic and parlayed that into a 10.897 to 10.885 double breakout win.

On Sunday action in Super Comp after 20 years of racing Chrissy Cox-Walters appeared in her first final round appearance in her DXI / DC Construction Dragster. In the finals she took the jump over Dave Long (.019 to .051) and a hole shot victory 8.918 to 8.901.

The final race of the weekend was Super Street. Sean Lanigan would match up against Bob Kerk. At the start Kerk took a huge advantage (.034 to .052) but took too much stripe on the other end handing the win to Lanigan 10.888 to Kerk’s 10.860.